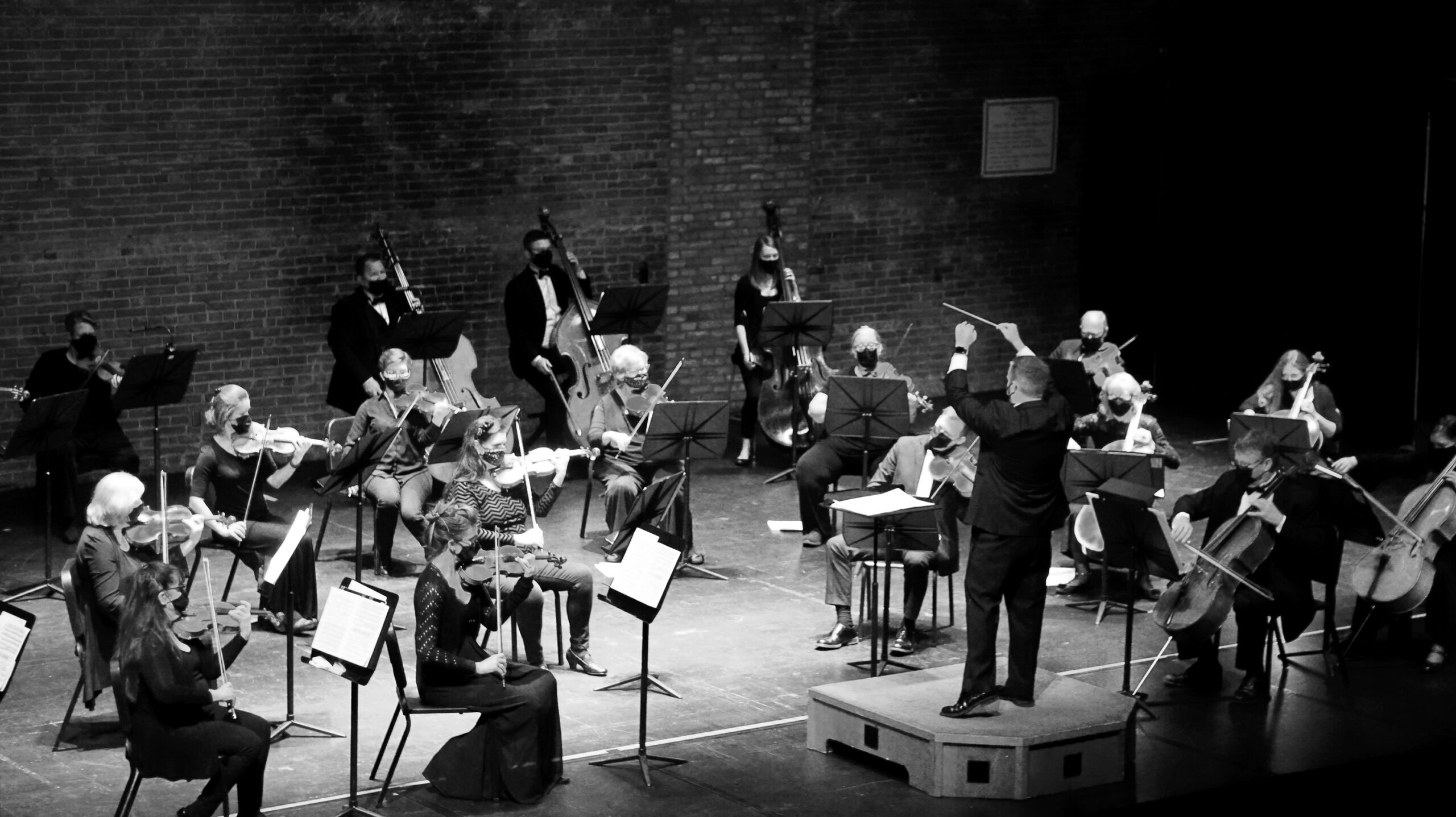 The GJSO is proud to present…

Tickets $10 for unlimited viewing on any device!

Purchase your tickets today to watch this delightful and uplifting show as many times as you’d like from now until April 30!

We hope you enjoy …

American composer Samuel Barber showed early promise as a determined musician and composer. At age 10, he wrote a note to his mother: “I was meant to be a composer and will be. Do not ask me to forget this ‘thing’ and go play football, please!” After studying music at the Curtis Institute of Music in Philadelphia, Barber would go on to win the Prix de Rome (1935), Pulitzer Fellowships (1935, 1936), a Guggenheim Fellowship (1945), a New York Music Critics award (1946), and a Pulitzer Prize (1958).

Barber’s Adagio for Strings is one of the most recognizable pieces of American classical music. The Adagio is sometimes called the “saddest” work of music ever written and has been performed at many momentous moments since its composition, including memorials of Franklin Roosevelt, John F. Kennedy, Albert Einstein, Grace Kelly, and others. It was originally the second movement of Barber’s String Quartet, opus 11, composed in 1936 while Barber was traveling near Salzburg, Austria for the summer with his partner, the composer Gian Carlo Menotti. He was only 26 years old.

Barber must have realized the power of this piece immediately, because he quickly created this larger arrangement for full string orchestra in the same year and sent a copy of the score to the famous conductor Arturo Toscanini for his review. Toscanini sent the score back without comment, frustrating Barber greatly. A short time later, Menotti visited with Toscanini, but Barber refused to go along. Toscanini explained to Menotti that he’d loved the piece so much he’d memorized it, and intended to perform it. The work was premiered by Toscanini and the NBC Symphony Orchestra in 1938, and the ensemble would later take it on tour, performing it along with Barber’s Essay No. 1 throughout South America.

Adagio for Strings was well-received from the start and has been a staple of American classical repertoire ever since. Its emotional power can be difficult to analyze. The compositional form and the harmony are rather simple. It has no complicated rhythms, nor even a particularly tuneful melody. And yet, it seems to be this combination of uncomplicated plainness that stirs us deeply as listeners and performers of this work. But Barber himself may not have intended the Adagio to be experienced as such profoundly sad music. He claims to have been inspired by a poem titled “The Wave” from Virgil’s Aeneid, which feels every bit as apropos to the shape of the music as any interpretation:

As when far off in the middle of the ocean

A breast-shaped curve of wave begins to whiten

And rise above the surface, then rolling on

Gathers and gathers until it reaches land

Huge as a mountain and crashes among the rocks

With a prodigious roar, and what was deep

Comes churning up from the bottom in mighty swirls

Of sunken sand and living things and water . . .

So in the springtime every race of people

And all the creatures on earth or in the water,

Wild animals and flocks and all the birds

In all their painted colors, all rush to charge

Into the fire that burns them: love moves them all.

Born in Mississippi, William Grant Still spent much of his early life in Arkansas before studying at the Wilberforce University and Oberlin Conservatory of Music in Ohio. He would later move to the east coast, where he studied composition with George Whitefield Chadwick and Edgard Varèse. Often called “The Dean of African-American Composers,” Still was the First African-American to compose a symphony that was performed by a prominent orchestra (Rochester Philharmonic with Howard Hanson, 1931), the first to conduct a major American orchestra (Los Angeles Philharmonic, 1936), and the first to conduct a major American orchestra in the deep south (New Orleans Philharmonic, 1955).

Much like Barber’s Adagio for Strings, Mother and Child was originally the second movement in a piece for a smaller ensemble–Still’s Suite for Violin and Piano, composed in 1943. The Suite was inspired by sculptures from the 1930’s by three prominent artists associated with the Harlem Renaissance. Mother and Child refers to any of several works of art by Sargent Johnson, who frequently represented the subject in paintings and sculpture. Still would later publish the movement in arrangements for string orchestra, cello and piano, and for string quartet, all with the same title. It’s a gentle piece, without a great deal of drama, that incorporates elements of spirituals and the blues within a traditional classical setting.

Judith Anne Still, the composer’s daughter, relates that the brief Mother and Child was not only one of her father’s favorite compositions, but is even today “surely most people’s favorite—people call regularly to say how beautiful it is.”

Victor Herbert, best known for his Light Opera and Musical Theatre compositions, especially Babes in Toyland (1904), is often thought of as an American composer but he was born on the Island of Guernsey in the English Channel in 1859 and moved with his mother shortly after to Freiburg, Germany. There was some confusion about who Victor Herbert’s father was, but his mother told young Victor he had been born in Dublin, and he believed and claimed he’d been an Irishman for most of his adult life. The family moved to Stuttgart in 1867 when Herbert’s mother married a physician there.

As a teenager, Herbert wanted to study to be a physician, but medical school proved to be too expensive, so he was encouraged to pursue music instead. He would go on to study at the Stuttgart Conservatory in cello, music theory, and composition, graduating in 1879. Herbert quickly gained a reputation as an excellent cellist, and performed in several ensembles in Stuttgart where he met the soprano Therese Förster in 1885. The two quickly fell in love, married in 1886, and moved to the United States where they had both been hired by the Metropolitan Opera of New York – she as a soprano in many principal roles, and he as principal cellist of the orchestra. Herbert would later pursue a triple-career as a cellist, conductor, and composer. He was director of the 22nd Regimental Band of the New York National Guard from 1894-1900, and Principal Conductor of the Pittsburgh Symphony from 1898-1904, until he resigned to form the Victor Herbert Orchestra, which primarily performed at summer resorts and on tour from 1904 until Herbert’s sudden death in 1924.

The Serenade for String Orchestra, Op. 12, was composed in 1884, while Herbert was still in Stuttgart, but wasn’t premiered until 1888 when he conducted it with the New York Philharmonic at Steinway Hall. It was first published in America in 1889, and Herbert played it regularly with his orchestras for the rest of his career.

This serenade is reflective of Herbert’s compositional study in Germany, and is therefore mostly the work of a “German” composer, steeped in the sound and influence of serious, heavy composers such as Richard Wagner juxtaposed with lighter, more cheerful operetta composers Johann Strauss, Jacques Offenbach, and Franz Lehar. Divided into five separate movements, the piece alternates between slow and fast, heavy and light. The centerpiece, though, is the middle movement, titled Liebes-scene (Love Scene), which is powerfully moving and lush and gorgeous. Most early reviews of the Serenade make particular mention of the Liebes-scene, such as the New York Times: “…a particularly good piece of writing, being warm in theme and forceful in expression, and showing the results of careful study of Wagner’s wonderful treatment of strings.”

Special thanks to our SEASON sponsors:

Special thanks to our CONCERT Sponsors:

Spring: A time or season of the year associated with the five “r’s” of rebirth, rejuvenation, renewal, resurrection and regrowth. – Elizabeth Brodak, GJSO Board President