“You write to become immortal, or because the piano happens to be open, or you’ve looked into a pair of beautiful eyes.” -Robert Schumann

Romanticism (1770-1850) was aptly named. It was a movement that abandoned reason, logic, strict musical form, and embraced raw emotion. Composers, musicians, artists, and writers threw themselves into unrestrained passionate creation. They told their love stories through art and melody just as popular musicians today write in response to heartbreak, tenderness, or desire. Here are six love stories beginning with French Romanticism and ending in contemporary Grand Junction. These are the stories of composers and musicians who defied family, loved in secret, became obsessed, or fell so desperately in love they married after four days. 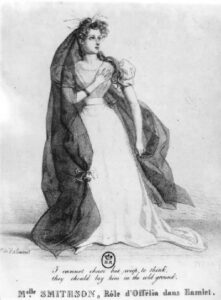 On September 11, 1827, Hector Berlioz discovered his ideal woman—Harriet Smithson’s portrayal of Ophelia in Shakespeare’s Hamlet. Harriet became Berlioz’s obsession and inspiration. Desperate to make himself known, he wrote her a myriad of love notes, all of which remained unanswered. Berlioz became haunted by visions of her as he composed his Symphonie Fantastique. The symphony tells the story of a gifted artist who is jilted by his beloved. In a fit of despair, the artist takes opium which induces a horrifying dream where he has murdered his beloved and witnesses his own execution. Harriet did not attend the 1830 premier. However, Berlioz and Harriet crossed paths again in 1832 when a friend of Berlioz convinced Harriet to go to the second performance of the symphony while she was in Paris. She attended the symphony unaware that Berlioz was the composer or that she was the beloved, the object of the composer’s devotion. The two met the day after the performance and married on October 3, 1833. Unfortunately, the marriage was a complete disaster, but many of Berlioz’s compositions, including Romeo and Juliette, were inspired by their ill-fated relationship. 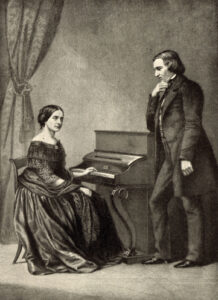 In 1830, Robert Schumann lived and studied with renowned piano teacher Freidrich Wieck. During the five years Schumann lived with the Wieck family, he dedicated himself passionately to the piano and his compositions. Friedrich’s blossoming 16-year-old piano protégé daughter attracted Schumann’s attention, and the two became very close friends, sharing walks and playing duets. When Clara was 18 Schumann proposed, but the two were forbidden to be together by Clara’s father. Friedrich Wieck did his best to separate Clara and Schumann, but they continued their courtship through letters full of longing and love songs. Clara once wrote, “When you gave me that first kiss, I thought I would faint; everything went blank and I could barely hold the lamp that was lighting your way out.” When Clara was 20, the couple married without Friedrich’s permission. Clara and Schumann spent their early marriage playing piano and composing together. They even kept a marriage diary together. On December 5, 1840 Clara writes, “We have been married a quarter of a year today, and it is the happiest quarter of a year of my life.” Unfortunately, the happy couple were not able to remain happy. Schumann suffered from terrible bouts of depression. He committed himself to the hospital after a suicide attempt in 1854 and died there on July 29, 1856. 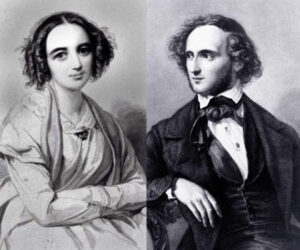 After hearing Therese Grob sing, Franz Schubert fell in love. Therese’s parents owned a silk-weaving business and lived in close proximity to the Schubert family, and the families attended the same church, Lichtental Parish Church, where some of Schubert’s first sacred music was written and performed. Sometime during 1814-16 Schubert gave Therese 16 songs he had written for her. The songs contain a variety of pieces, secular and sacred, composed for the lovely voice which had captured his heart. Therese has been described as a plain woman, “rather plump and with a fresh childlike round face,” and Schubert, five-feet tall exactly “a bit on the pudgy side, potato nose, and curly brown hair.”  Music brought these two unlikely lovers together. Schubert once told a friend, “I loved someone very dearly, and she loved me too. For three years she hoped I would marry her; but I could not find a position which would have provided for us both.” Because of their class difference, Schubert was not permitted to marry Therese without proving that he could support her first. He attempted to find a job as a music teacher at a training college, but his application was ultimately rejected, and the two were never permitted to marry. 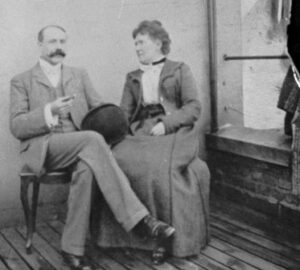 Alice Roberts was the daughter of a semi-aristocratic English family, and Elgar was the son of a shopkeeper who made his living teaching violin and piano. At age 37, after becoming an accomplished linguist, poet, geologist, and author, Alice became Elgar’s piano student. It wasn’t long before piano lessons turned into courtship. The carriage driver who took Alice to her lessons commented that he “thought there was more to it than music.” Alice wrote a poem for Elgar titled, “Love’s Grace,” and Elgar in turn composed a piece called “Salut d’Amor” (Love’s Greeting) for Alice.  Both families objected to the marriage. Elgar was eight years younger than Alice, in a lower class, and he was a Roman Catholic while Alice was Anglican. However, Alice believed in Elgar’s talents, and the two married. Alice wrote in her journal, “The care of a genius is enough of a life work for any woman.” After they were married, Elgar’s music flourished. His best composition years were during their marriage. Elgar’s cello concerto was published in 1920 the year before Alice died. After her death, for the remaining 14 years of his life, he rarely composed. 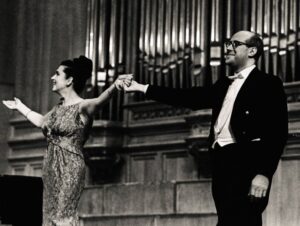 Musical legends Galina Vishnevskaya (opera) and Mistslav Rostropovich (cello) met in Moscow at a government reception in 1955, but their whirlwind romance didn’t happen until a few weeks later in Prague. They were there for separate musical ventures, but they met in the park for a walk one beautiful evening. Galina recalls, “The first day, I went to my closet at the hotel and found my clothes completely covered in lilies. The following day, I found orchids in all four corners of my room. The third day, the floor was strewn with boxes of chocolates. That day, I was supposed to return to Moscow. And though he had other engagements, without a moments hesitation, he canceled them and followed me. On the fourth day, we were married.”  Although their musical endeavors had brought them together in the same place, they did not hear the other perform until 6 months after they were married. Mistlav wanted to become Galina’s accompanist, but Galina thought he was crazy. He was a cellist, not a pianist. However, Mistlav practiced until they could perform together. He once said, “We would be so angry with one another that we would go to the concert hall without speaking to one another, promising ourselves that we would never perform together again. But then, on stage we would merge into an indissoluble whole, taken to a distance beyond the clouds. . . suddenly, we would start to talk to each other with the language of music.” The dynamic couple built their relationship around their separate musical careers, fusing them into one.  They were married for more than 50 years. 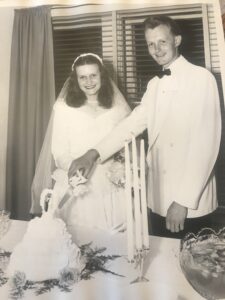 After returning from his service in the Airforce in France, Walt Birkedahl studied trumpet at the Lamont school of music at Denver University where he met a piano student, Nonie Fitzgerald. In the fall of 1948, Nonie was walking to the dentist when Walt pulled over and asked if she needed a ride. The tall blonde trumpet player stood out at school, and Nonie was happy to have a ride and get to know Walt a little better. In the car, Walt asked Nonie if she would like to come and hear his band play at Eliches that Saturday night. Nonie eagerly accepted, and on Saturday she watched enthralled while Walt performed. After another band took the stage, Nonie and Walt danced. Nonie later commented, “When Walt played the trumpet, he was dreamy.” They were married in June 1949. Walt was a member of the Denver Symphony (the pre-cursor to the Colorado Symphony), and his musical obligations brought the newlyweds to Aspen, Colorado for their honeymoon and the Aspen Music Festival. Here, Walt played The Firebird Suite under the baton of Stravinsky. The couple lived around the Grand Valley for many years, but in 1983 they settled down in Grand Junction where Walt joined the Grand Junction Symphony as a member of the cello section. He retired from the symphony in 1997, but he continued to teach lessons. He and Nonie were married for 59 years, until Walt’s death in 2008. They left a musical legacy through their family and their students.

Classical music brought these lovers together and nearly tore some apart. Yet their lives and their music were inspired by the people they loved.

Listen to these love songs written or performed by the characters in the stories above.