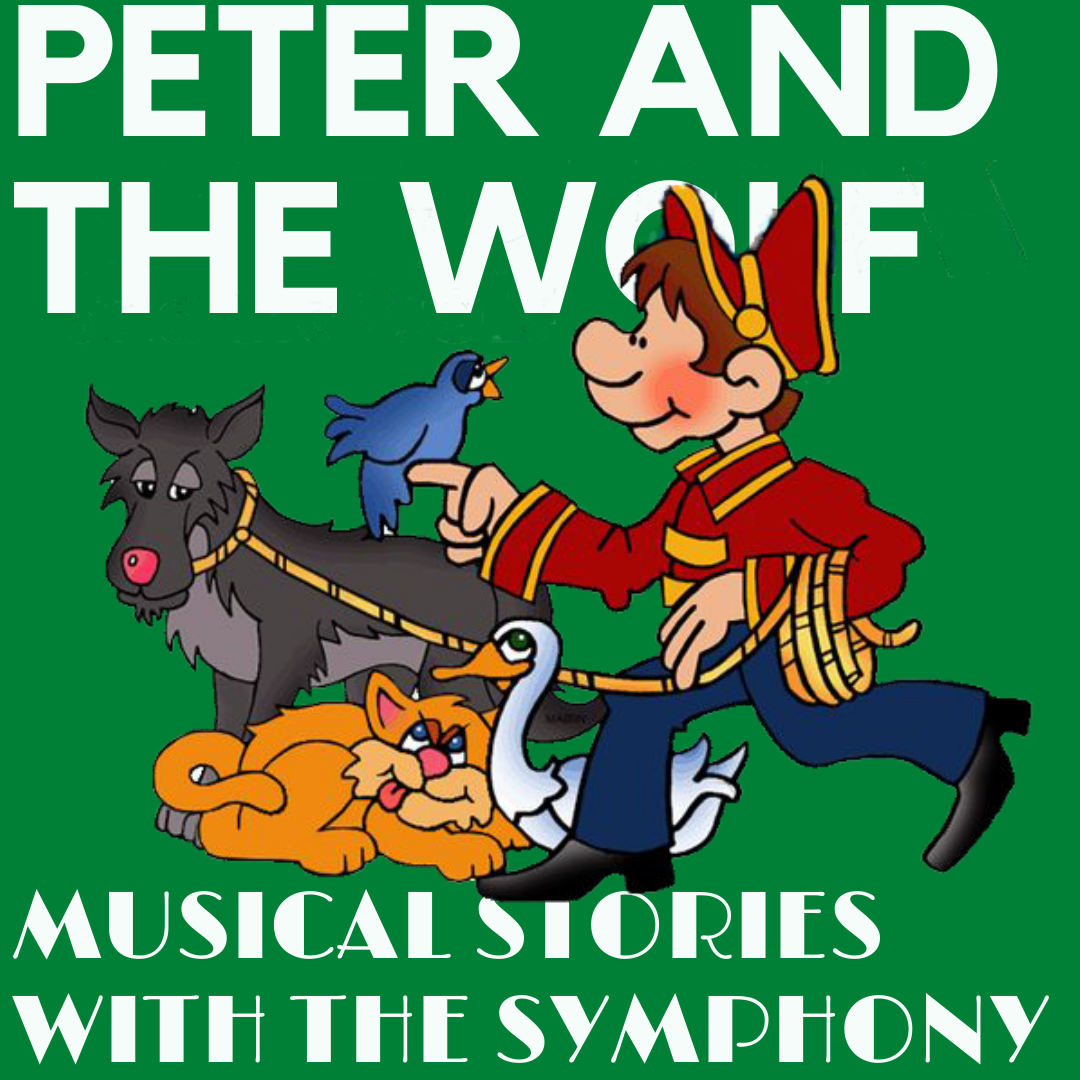 Prokofiev’s Peter and the Wolf

The Grand Junction Symphony Orchestra is pleased to present Peter and the Wolf as part of our Musical Stories with the Symphony concert on June 12, 2021. This free concert at Las Colonias Amphitheater will be the perfect family-friendly event to kick-off your summer. 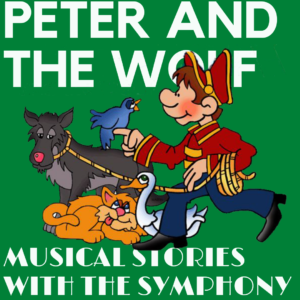 Peter and the Wolf

The symphonic story opens with Peter, a Russian boy scout, sneaking out of his gated yard and venturing into the meadow in front of his house. He is followed by a duck who has been enjoying a swim in the pond. In the meadow, Peter observes a cat creeping up on a little bird. Then, Peter’s grandfather catches Peter outside the gate and warns him that a wolf could be hiding near the meadow. Grandfather leads Peter back home and locks the gate, but Peter stays in the yard and climbs on top of the fence. He sees the wolf, but he is not afraid.

The detail that Prokofiev incorporated into the musical score is clear by the pictures he is able to paint with the character themes and accompanying action. Prokifiev recommended, “Before an orchestral performance it is desirable to show [the] instruments to the children and to play on them the corresponding leitmotivs. Thereby, the children learn to distinguish the sonorities of the instruments during the performance of this tale.” Peter’s theme is played by the string quartet. The melody is cheerful and confident, a brilliant representation of a fearless young boy. The oboe plays a slow, smooth melody for the duck who swims gracefully on the pond. The chirping staccato notes on the flute capture the restless bird’s twittering and quick reflexes. The cat’s melody begins with short notes, like tip-toeing through the tall grass, followed by smooth legato as he creeps closer to the unsuspecting bird. The cat is followed by Grandfather whose melody is played on the deep bassoon. It is easy to picture the bass of a grandfather reprimanding his grandson for wandering too far. The wolf’s loud, sinister theme, played by the French horns, is a stark contrast to Peter’s lilting melody. There is no bounce in the wolf’s step. The wolf and Peter are the only two characters who are represented by multiple instruments and portrayed by both melody and harmony, offering the characters more complexity. Finally, the hunters are fittingly represented by the kettle drums, like the booming of their hunting rifles. Throughout the piece, Prokofiev demonstrates great deal of insight into what appeals to children and adult audiences alike.

There are many interpretations of the story. Harlow Robinson claims that Peter and the Wolf “contains no explicit political message. It even seems to endorse disobedience toward one’s elders, and to discourage undue caution.” Simon Armitage from The Guardian asks, “Was [Peter and the Wolf] meant as a parable of new idealism brushing aside the old order, or a subversive side-swipe at Russian political paranoia? Or is there something more spiritual or psychological at stake?” Given the political turmoil that Prokofiev had just re-entered, it is possible that he was analyzing through story and music his current situation. It is also possible he was remembering his own boyhood or capturing the mischievousness and determination of his own boys, or perhaps it is just a story that emulates the patterns of Russian folklore.

Peter and the Wolf has been translated into 12 languages and recorded more than 400 times. Famous narrators include Eleanor Roosevelt, Captain Kangaroo, Sean Connery, Patrick Stewart, and David Attenborough. At the 50-year anniversary performance done by the Brooklyn Philharmonic, Lina Prokofiev narrated. Film adaptations include a 1946 Disney animated version, and Suzie Templeton’s stop-motion 2006 movie which won the 2008 Academy Award for Best Animated Short Film. Other adaptations include multiple Jazz versions, and a 1975 rock version by Jack Lancaster and Robin Lumley. 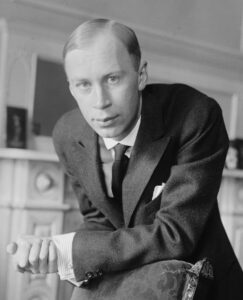 Who was Sergei Prokofiev?

Sergei Prokifiev was one of the great Russian composers who emerged during the 20th century along with Sergei Rachmoninoff, Igor Stravinsky, and Dimitri Schostokovich. Prokofiev was born in what is now Eastern Ukraine on April 23, 1891. His first piano teacher was his mother who gave him his first glimpses of the world that music offered. At age 15, Prokofiev moved to St. Petersburg to attend the St. Petersburg Conservatory where he studied with Rimsky Korsokov and Glazunov. Prokofiev was a difficult student, but he established good friendships among his peers at the conservatory. At graduation, he was awarded the Rubinstein Prize, “the highest honor available to a pianist, for the performance of his own Piano Concerto No. 1.” After the upheaval of the Russian Revolution in 1917, Prokofiev felt uncertain about his career as a musician and composer in Russia, so he immigrated, living and touring in the United States, Germany, and France. He met his wife, Spanish singer, Carolina (Lina) Codina in New York, and together they settled in Paris. The couple had two sons.

After nearly twenty years abroad, the Russian government lured Prokofiev back to Russia in 1935 with promises that they would publish any opera or ballet he wrote. While Prokofiev returned as a celebrated artist and composer, it was the beginning of a dangerous time for intellectuals, authors, artists, and composers. In January 1936, a scathing review in Pravada of Dimitri Shostakovich’s opera Lady McBeth of Mtsensk began the anti-formalism campaign that quickly led to Stalin’s Great Purge when many musicians, their friends, and their families would be arrested, executed, disappear, or serve sentences in the Gulag. Despite the government’s promises, Prokofiev’s work was perpetually scrutinized and revised to ensure that it did not contain anything that could be construed as anti-government. Prokofiev must have felt the tremors of foreboding as he embarked on his journey as the preeminent composer in Russia.

After his family arrived in Moscow, Prokofiev took his sons to performances at the Moscow Children’s Theater where he met the director, Natalia Sats. She asked him to compose a short symphonic work for the theater. According to Harlow Robinson, during a telephone conversation with Sats, Prokofiev said, ”We must start with something specific, something full of contrasts, something that makes a strong impression. [. . .] The most important thing is to find a common language with the kids.” Prokofiev demonstrated his enthusiasm by writing a piano version in just one week and completed its orchestration one week later. He rejected the initial text written by poet Nina Sakonskaya because he considered it trite; instead, he decided to write his own. His simple text clarifies the story without diminishing the significance of the music.

Peter and the Wolf was first performed and narrated by Prokofiev on the piano for a small audience at the children’s theater. The performance was a great success. However, its premier with the Moscow Philharmonic on May 2, 1936, failed to excite the audience. It was re-premiered later at the Children’s Theater where it began its long celebrated journey as a classic in the repertoire for children’s concerts.

Between 1936 and 1947, Prokofiev enjoyed recognition as great composer. Six of his major compositions were given Stalin Prizes, and he was even awarded the People’s Artist of RSFSR (Russian Soviet Federative Socialist Republic) in 1947. His major works include film scores, ballets, symphonies, sonatas, and concertos. Prokofiev died on March 5, 1953, the same day as Stalin. They could not remove Prokofiev’s body for three days because of the thick crowds in Moscow.

We hope you will join us for Musical Stories with the Symphony where we can share the wonder and tradition of Prokofiev’s Peter and the Wolf.

Do you have any special memories about when you last saw Peter and the Wolf?